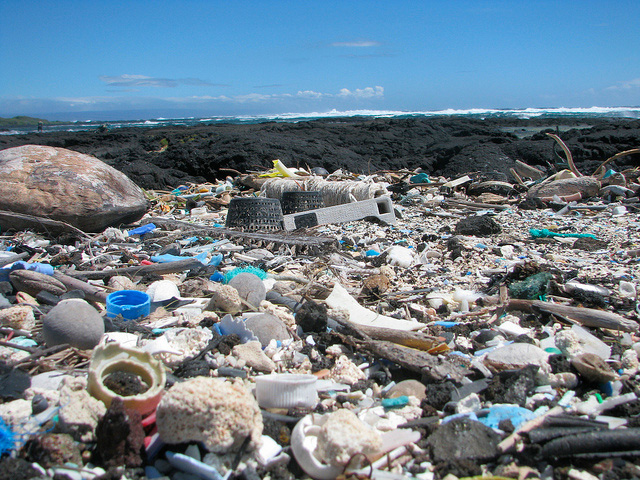 Jen and I had the privilege of visiting isolated Kamilo Point (aka “Junk Beach”) on the Big Island of Hawaii in March, thanks to Dr. Curtis Ebbesmeyer. He connected us with the incredible local artist Noni Sanford. She and her husband Ron brought us to Kamilo Point, along with Bonnie Monteleone, Dr. Bill Cooper, and Amanda Martinez. They had come to Hawaii for the Fifth International Marine Debris Conference. A description of our trip follows.

At Kamilo Point, near the Big Island of Hawaii’s southern tip, jagged black lava extends right to the seething ocean. The water turns from midnight to turquoise to frothing white as it churns against the rocks. Native naupaka shrubs and low heliotrope grip thin stretches of sandy soil and provide the only relief of green. Mauna Loa, Earth’s largest volcano, looms dark in the northwest. An eruption in 1868 spewed the fiery lava that now covers this landscape.

Most tourists don’t visit Kamilo, which means “swirling currents” in Hawaiian. The only way to reach this beach is a five-mile stretch of progressively deteriorating road over gravel, lava, and sand. It takes Noni an hour of expertly navigating our rental Jeep around rocks, ditches, and drop offs to reach the point. We all hold our breaths when the Jeep tilts crazily over a boulder or goes vertical at an incline. But we make it. Noni nicknames the forest green truck “Greeny Guy.”

We step out of the Jeep and the wind hits us. Ron clocks it with his handheld meter at 40 miles an hour. We can’t hear one another speak unless we stand quite close. The wind literally tears our voices out of our mouths and flings the sound away. It throws stinging sand and salt at our skin. Hats, even tied, won’t stay on. Sunglasses and camera lenses fog with salt spray.  The sun beats down without relief.

No one else appears on the beach besides a few local fishermen standing by their red pickup, stuck in the sand. Ron uses his Unimog, a bright orange truck with giant tires, to pull them free. Even with their big machines, humans seem tiny here against the vast backdrop of rock, ocean, and sky.

We pick our way across the lava–a misstep and the jagged rock tears into skin. Over a small rise, we come to the tide line. I’ve read about Kamilo Point, but the sight still stuns me. The tides here have tossed up a tremendous jumble of driftwood, coconut shells, coral–and plastic. Bright colored plastic of every shape and size litters beach.

We descend across the slippery landscape of debris. Larger bits–a piece of car fender, foam blocks, bottles, a tire–lie scattered all along the shore. But the tiny plastic fragments, broken into smaller and smaller bits by the ocean waves, seem most disturbing. They drift in sheltered crevices and pool in depressions in the lava. In places I can dig with my fingers through inches of plastic chips before reaching rock or sand. Plastic bits appear everywhere, turning the sand from white to multicolored all the way up to the shaded campground 100 yards from the tide line.

Near a small, protected shelf under the rocks, we watch the waves wash in, bright plastic swirling in the water. Some fragments stay behind, shining on the black lava; some tumble back out with the waves.

Noni bends and searches, steadily placing objects into a bag she has sewn from an old t-shirt. Noni has been beach combing all her life; she is a connoisseur of ocean debris. Her father, an artist, made intricate carvings out of driftwood. She sometimes makes sculptures from the junk she finds on the shore.

I am suffering from overload, like an inexperienced shopper at the Mall of America. I ask her where to start, what to look for in all this debris. She shrugs. “Whatever interests you, I guess.”

I start to notice particular objects, then some patterns. Plastic wedge heels from platform shoes seem oddly common. I see at least half a dozen. I find several small brown and black bottles that Noni says are Japanese and old, from the 50s or 60s. Two motorcycle helmets, one with purple lining and barnacles attached lying next to a brown construction helmet. A brand new tennis shoe. A blue and black detergent-shaped bottle with Japanese characters. In English it says “Antisepsis Remove Bacilli. The Blanch Water.”

Plastic combs, several plain black and a few pink ones adorned with flowers. Two plastic gum containers with Japanese characters. One says in English “Xylicube Lime mint;” the other “Fruits Gum.” Chunks of plastic foam and a strange waxy substance. So many bottles and bottle caps that they fade into the background. A few water bottles (Aquafina, Evian) that look like they just came from the store. Plastic fishing floats of all shapes and sizes, with Korean and Japanese lettering.

I pick up a Febreze bottle that says “Eliminates odor and freshens the air. Spring + renewal scent.” An Epson printer cartridge, barely hanging together. The plastic structure for the heel of a shoe, which forms an A shape, so I keep it. Several plastic umbrella handles, which Noni collects. A glass bottle with a mysterious brown liquid inside. A brown plastic shell that Noni says is half of a Japanese octopus trap. A scrap of astroturf. Perhaps a dozen disposable lighters. Several toothbrushes. Noni finds a piece of white plastic that says “God.” Jen finds a bent hypodermic needle. We seal it inside a plastic bottle.

Today isn’t about cleaning the beach. In fact, we take very little–we have to squeeze whatever we collect into the Jeep and then pack it in luggage. Noni and Ron work with the Hawaii Wildlife Fund to organize volunteer beach cleanups here several times a year, and things have gotten better.

“When we first started doing this,” says Noni, “the plastic was ten feet deep.” In 2003, the state sponsored the first large scale cleanup. Noni says the Coast Guard got involved, using nets suspended from helicopters to collect trash. Volunteers removed 50 tons of debris. In the next cleanup a few years later they removed more than 40 tons.

“Now we get out 500 pounds to a ton of plastic during a clean up,” says Noni, who was born near here and visited this beach as a child with her father. No trash littered the beach then. When Noni returned as an adult, what she saw shocked her.  She says she tried for a long time to draw people’s attention to the trash at Kamilo.

Her efforts have started paying off. She and Ron live nearby in the town of Volcano Village on the smoking flank of Kilauea. They regularly bring scientists, writers, filmmakers, and the curious to this stretch of beach to see it firsthand, and Noni has become a resource for scientists studying the ocean. The umbrella handles she collects are for Charlie Moore of the Algalita Marine Research Foundation. She says he chooses specific objects to collect as a sort of survey.

We wander this quarter mile of beach for nearly two hours. Ron drives the Unimog over the lava to the shore, hooks a massive tangle of fishing nets to the back, and hauls the net up above the tide line. They bought the Unimog for this purpose. The frayed plastic nets roll into a giant tangle that can weigh more than a ton. In the ocean, they continue to “fish,” ensnaring turtles, birds, and other marine life. “Ghost nets” represent the most dangerous kind of marine debris for wildlife; Noni and Ron never leave them on shore.

We spend the rest of the day touring several more plastic collection sites between Kamilo and South Point five miles away at the tip of Hawaii. The wind, the sun, the rocking of the Jeep–it all starts to blur together. At one point, I’m standing on a 20-foot cliff, back to the waves, surrounded by debris. The wind gusts a sheet of metal two feet square up over my head, narrowly missing me. Further down the road, I pose by a giant tree stump, at least ten feet in diameter, evidence of the waves’ power to bring massive objects to land.

In fact, the ancient Hawaiians treasured this place for the giant timbers it washed ashore, according to Ebbesmeyer in his book Flotsametrics. The currents delivered tall straight pines from the west coast of North America, which Hawaiians used to build massive, hundred-foot canoes. Ebbesmeyer calls the timber brought by the ocean “the keys to wealth and war.”

Today, the same convergence of currents picks up debris washed from every nation in the northern Pacific Rim–Japan, China, Canada, the U.S., Mexico–and deposits it here, some 2,400 miles from the nearest landmass. I start to think of the trash on the beach as a mirror for our civilization, reflecting some of its most enduring objects: Spring + renewal scent Febreze. Fruits Gum. Artificial grass. And a plastic shard called God.