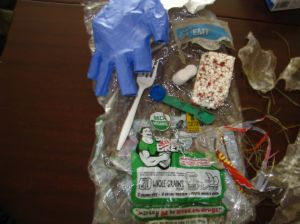 For many weeks I have been somewhat stalled in my plastic collecting process, not wanting to pick up many things I encounter with my bare hands, but also not wanting to use disposable plastic gloves. What to do?

Gloves used to be made of latex — natural rubber — until lots of people apparently had allergic reactions to them. Latex gloves are still made, but I couldn’t find any in my local drugstore. Most were vinyl — made of PVC, yikes! PVC is softened with pthalates, linked to deformed sex organs in baby boys. Check this 60 Minutes story, which quotes a doctor saying that pthalates “in several subtle ways make boys less completely masculine.” We could spend a long time unpacking that.

But anyway, back to the gloves. The only other, more expensive, option was nitrile, which a web site called “Glove Nation” tells me is a is a synthetic rubber made by combining acrylonitrile and butadiene, invented in the 1980s. I have no idea how long it takes these gloves to break down, but the package contains warnings about keeping them out of sunlight, fluorescent light, x-rays, moisture and ozone, which makes me think they won’t last forever in the environment. I sighed, and bought some, in a lovely shade of lavender.

I guess today I was glad because in my plastic gathering I picked up a white styrofoam block on the side of the road and it wasn’t until I turned it over at home that I noticed it is spattered with something that looks a lot like blood. It was near a shred of wrapper printed with the letters EMT, like emergency medical technician, but I have no idea whether these things are related. Other findings:

wrapper for DAVE’S Killer Bread. “Just say no to bread on drugs!” 21 WHOLE GRAINS Killer taste and texture no animal products GMO free – all natural. With a cartoon picture of Dave — big muscles, mustache, long hair, and his electric guitar and another cartoon of a piece of bread wearing a visor playing cards with some shapes that might be fruit. For those who just have to learn more about Dave, an ex-con, and his bread: http://www.daveskillerbread.com/